The Golden Pavilion is a wonder in Age of Empires III: The Asian Dynasties that is unique to the Japanese and can be built to advance into the next Age. It sends a shipment of Yumi Archers when built and enhances one of the stats of all military land units chosen by the player (see below), as well as containing advanced Arsenal technologies.

+15% attack for melee infantry and cavalry

+15% attack for ranged infantry and cavalry

As the Golden Pavilion is unique to the Japanese, only technologies that they have access to are shown in the following table:

As the Golden Pavilion is unique to the Japanese, only their cards and other civilizations' TEAM cards are shown in the following tables:

"The Golden Pavilion Temple (Kinkaku-ji) is the name of the hall of relics at the temple grounds of Rokuon-ji. Aside from the basement floor, the whole pavilion is covered in pure gold leaf. Situated in Kinkakuji-chô, Kita-ku, near the Japanese city of Kyoto, The Golden Pavilion Temple was originally constructed in 1397 to serve as the retirement villa of the third Ashikaga Shogun, Yoshimitsu. Originally a luxurious estate owned by the Saionji clan, Yoshimitsu acquired the land after the clan’s influence declined.

The pavilion itself houses relics of the Buddha and serves as the centerpiece of the temple. The temple itself has been burned down multiple times during its rich and storied history, particularly during the Onin War (1467-1477). The temple burned down again later by an insane monk, which later became the subject of a film entitled "The Temple of the Golden Pavilion".

Rokuon-ji, the temple proper, features more than the glinting structure of Kinkaku-ji. Lush gardens and a mirror pond accentuate the Zen quality of the location." 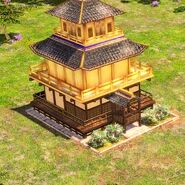 The Golden Pavilion as it appears in-game

A photo of the real Golden Pavilion in Kyoto
Add a photo to this gallery
Retrieved from "https://ageofempires.fandom.com/wiki/Golden_Pavilion?oldid=258855"
Community content is available under CC-BY-SA unless otherwise noted.