8
Gol Gumbaz is an unconstructable building introduced in Age of Empires II HD: The Forgotten. Its real life counterpart is a sultan's mausoleum, located in the city of Bijapur, Karnataka (a state located in South India).

Upon its introduction in The Forgotten, the Gol Gumbaz was the Wonder of the Indians. When the Indians got their new unique Vijayanagara-style architecture with the introduction of Rise of the Rajas, it was replaced with the Brihadeeswarar Temple, located in modern-day Tamil Nadu, another state in South India.

The Gol Gumbaz was rendered unconstructable and remains available in the Scenario Editor only.

This was probably due to the fact the new Wonder fitted better with the new architectural style, but also because its appearance was anachronistic, as it was completed in the middle of the 17th century. 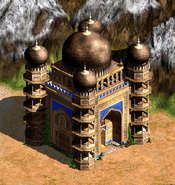 Gol Gumbaz in-game
Add a photo to this gallery
Retrieved from "https://ageofempires.fandom.com/wiki/Gol_Gumbaz?oldid=313195"
Community content is available under CC-BY-SA unless otherwise noted.