Age of Empires Series Wiki
Register
Don't have an account?
Sign In
Advertisement
in: Age of Empires III, Age of Mythology, Herdables,
and 3 more

Goats were planned for Age of Empires, but went unused. A building called the Pasture would have allowed players to train them as a faster way of gathering food than Farms.

4-6
Goats were introduced in The African Kingdoms, and are often found on Africa-themed maps as an alternative to Sheep. Goats are a common food source that is beneficial in the early stages of a developing game when building many Farms is not yet affordable. Their statistics and use are the same as Sheep; they have 7 hit points, hold 100 food, and the same speed, and can be converted by other players.

They may also be used to scout around in early stages of the game, although their poor Line of Sight, slow movement, and possibility of being stolen by the enemy means this is of limited effectiveness. 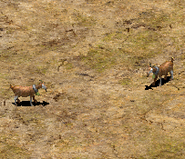 A group of Goats

4-7
The Goat in Age of Mythology is less common than the Pig, but more common than the Cow, and is typically found on Greek-themed and island maps, such as Archipelago and Islands. Upon discovery, Goats hold 50 food, but they fatten over time (at a base rate of 0.35 food per second) up to a maximum of 300 food.

In addition to being found on the map, Goats can be created by using the god power Year of the Goat, available to worshipers of Fu Xi. This god power spawns between 3 and 12 Goats, depending on the Age the casting player is in.

In contrast to Age of Empires II, Goats are not advised to be used as scouts due to their small Line of Sight and poor speed. As with all herdable animals, the use of Goats for food gathering can be effective after researching Husbandry and after all usable hunt sources have been depleted. Gathering from herdable units is the second fastest form of food gathering. 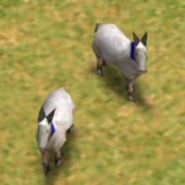 1
Goats are animals that fatten over time, much like Sheep. Each Goat starts out with 75 food and progressively fattens over time. The maximum amount each Goat can acquire is 300. The Chinese receive a free Goat at the start of every game.

The Pilgrimage improvement, available at a Trading Post built on a Sufi Mosque settlement, will provide a shipment of fattened Goats every 2 minutes for 30 minutes, providing up to 15 Goats.

A herd of Goats close to the Yellow River