Age of Empires Series Wiki
Register
Don't have an account?
Sign In
Advertisement
in: Age of Empires, Glory of Greece

The Glory of Greece is a campaign in Age of Empires that starts during the establishment of the first Greek city, known as Athens, and ends with Alexander the Great conquering Persia.

This set consists of 8 different scenarios, each with different challenges and set of goals the player must overcome.

With the launch of the Definitive Edition, the campaign now consists of the following scenarios: 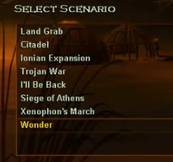 Besides the name changes, the original line-up of scenarios had Ionian Expansion as the third scenario and the now reworked The Conquest of Crete (I'll Be Back in the original) was the fifth. The Definitive Edition added Colonization of Ionia, and Alexander the Great replaced Wonder.