Giuseppe Garibaldi (1807 - 1882) is the AI personality of the Italians in Age of Empires III: Definitive Edition. He was renown both as a fighter in Italy for national unification as well as his military adventurism abroad in South America as a mercenary.

More than any other leader, the difficulty of dealing with Garibaldi's Italians is dependent on the difficulty of the AI and the handicap he is given. This is because the Italians start with many food crates but few Settlers. On low difficulties and without a handicap, the yield penalties imposed by the lower difficulty will significantly reduce the amount of food Garibaldi receives from the crates, making his start much weaker. Higher difficulties and handicaps reverse this, making it possible for Garibaldi to age up very quickly and allowing him to research many Market improvements that will further speed up his boom.

Garibaldi as an Ally[]

Garibaldi as an Enemy[] 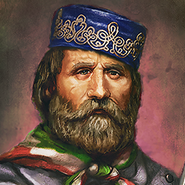