The Ghulam is a unique unit of the Hindustanis in Age of Empires II: Definitive Edition - Dynasties of India, trained from the Castle, replacing the Indians' Elephant Archer. It is an anti-archer infantry that thrusts its spear through multiple targets and is adept against masses of archers, but weak vs. cavalry.

The Ghulam is a peculiar infantry unit; most infantry are weak against archers, due to their low movement speed and low pierce armor. Ghulams have high pierce armor, fast movement speed, an attack bonus vs archers, and its attack deals damage to the unit behind its target. Ghulams excel at taking down armies of archers, especially if massed.

Ghulams fill an important role in Hindustani armies, covering a natural weakness Hand Cannoneers and Camel Riders have against archers, since these two units are specialized in countering infantry and cavalry, respectively. Since Ghulams are highly vulnerable against melee attacks, they should be paired with either Camel Riders or Hand Cannoneers.

As Ghulams are unique to the Hindustanis, only technologies that are available to them are shown in the following table:

Ghulam (غُلَام) (plural Ghilman (غِلْمَان), lit. servant) were slave-soldiers and/or mercenaries in the armies throughout the Islamic world. Ghilman were slave-soldiers taken as prisoners of war from conquered regions or frontier zones, especially from among the Turkic people of Central Asia and the Caucasian peoples. They fought in bands, and demanded high pay for their services.

The Delhi Sultanate also made extensive use of Turkish cavalry ghilman as their core shock troops. After Central Asia fell to the Mongols, they switched to capturing Hindu boys to convert into Islamic slave soldiers[1]. 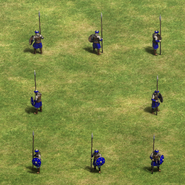 When a Ghulam attacks an enemy unit, the other unit that stands right behind it will also receive damage.