Age of Empires Series Wiki
Register
Don't have an account?
Sign In
Advertisement
in: Age of Empires III, AI personalities, Revolutionaries,
and 3 more

Deceased (historically)
Alive (as of The Battle of Yorktown)

The Battle of Yorktown

Washington is first featured in Act II: Ice as a then-British colonel during the French and Indian War. Washington and his men fought for General Warwick until they consider their British General a traitor because he is working with The Circle. So Washington and his men deflected to John Black and help him defeat Warwick with supplies of soldiers.

Washington is featured again in Act I: Fire, now a general and the commander-in-chief of the U.S. Continental Army in the American Revolution. Washington also meets Nathaniel Black after the Battle of Bunker Hill, who aids him and his men in conflicts such as the Battle of Trenton and the struggle in Valley Forge. Later, Washington becomes the political leader of the newly formed United States as its first president.

Washington fights with his officer's saber, both as a colonel and a general. As a general in Act I: Fire, he can receive Home City shipments.

Like other heroes, Washington has many hit points, but if he falls, he will collapse instead of dying and needs to regenerate enough hit points to be rescued by allies. He can collect treasures, but unlike Explorers, cannot build Trading Posts and Town Centers, and has no special abilities.

In The WarChiefs, Washington also appears as the revolutionary leader of the United States, which is available for British and Dutch. Choosing him to revolt increases the hit points of Gatling Guns by 25%.

Daniel Riordan
In the Definitive Edition, Washington appears as the AI personality for the United States civilization. He is quite philosophical and will often use elaborate language when sending messages to the player.

In terms of military, Washington often struggles due to a very low numbers. Therefore, he will generally lose in a 1v1 situation unless he rushes his opponent in the Commerce Age before they've had time to build up a superior force. Washington's army is typically comprised of State Militia, Regulars, and Sharpshooters. In later ages, he will add a few supporting units such as Carbine Cavalry, Cowboys, Gatling Guns, and/or Mortars.

Washington gazing over the American landscape 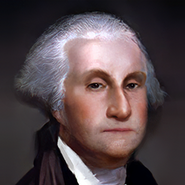 Wikipedia has an article about:
George Washington
Community content is available under CC-BY-SA unless otherwise noted.
Advertisement