" 'Check in your wallet. That's me on the dollar bill.' "
—In-game description

George Crushington is a cheat unit in Age of Empires III. He is one of the most powerful units in the game (along with The Tommynator). He attacks by banging his head on soldiers in melee combat, crushing enemy units under him (for trample attack), and blowing fire at buildings during a siege.

The unit is a large stone bust, and resembles a figure of George Washington. Its description reads: "Check in your wallet. That's me on the dollar bill." a reference to one of the in-game taunts. When killed, it crashes to the ground.

An army of George Crushingtons attacking a Russian settlement 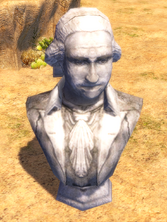 An in-game George Crushington model
Add a photo to this gallery
Retrieved from "https://ageofempires.fandom.com/wiki/George_Crushington?oldid=279738"
Community content is available under CC-BY-SA unless otherwise noted.