The Genoese Crossbowman is the first unique unit of the Italians in Age of Empires II HD: The Forgotten. It is a foot archer with an attack bonus against cavalry.

The Genoese Crossbowman is a crossbow-wielding unit that has an attack bonus against cavalry and as such can prove to be a great defense against enemy Knights. Even mighty elephant units (such as War Elephants and Battle Elephants) can be slaughtered very easily when faced with large mobs of Genoese Crossbowmen, though the Italian unique unit suffers from reduced effectiveness when battling Cataphracts as those have a high amount of bonus defense.

The Genoese Crossbowman is a well-rounded unit as it lacks and even counters the main weakness of most archers, which is cavalry. In masses, they are good against cavalry and infantry alike and can also defeat some weak archers when massed, though Rattan Archers and Plumed Archers will win against them. Despite the attack bonus, cavalry units can still defeat them on one to one combat. They are still vulnerable to Mangonels, although to a lesser extent than other archers due to having enough HP to survive a single Mangonel shot, and other anti-archer units such as Skirmishers and Genitours. Huskarls, which have good pierce armor and an attack bonus against them, are especially effective against Genoese Crossbowmen. The speed and armor of faster infantry such as the Eagle Warrior can pose a problem as well. They can be paired up with the cheap Italian Hand Cannoneers whose attack bonus against infantry can prove very useful against civilizations with archer threatening infantry.

The Rate of Fire in the Definitive Edition is set to 2.0, the same as the Crossbowman, having no more drawback in the Castle Age. They are still among the archer unique units that take the most time to train, so it is difficult to mass them.

Comparison to the Archer line[]

As Genoese Crossbowmen are unique to the Italians, only technologies that are available to them are shown in the following table:

The Genoese crossbowmen were mercenaries from Genoa that assisted in defending it and other Italian and European cities. They carried daggers, crossbows, a chain mail shirt, and large shields called pavises. After firing, the crossbowmen would hide behind their pavises while reloading. This protected them from other ranged attacks. What makes the Genoese crossbowmen so special is they operated in teams of three. One would set up and maintain the pavise while one shoots and another reloads a second crossbow handing him to the shooter when reloaded. This effectively doubled the fire rate of the skilled crossbowmen. The Genoese crossbowmen participated in the Crusades. 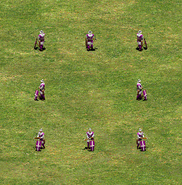 A group of Genoese Crossbowmen

A group of Genoese Crossbowmen attacking. Notice that they carry the shield on their back when they move.

A Genoese Crossbowman in real life (notice the pavise)

Genoese Crossbowmen in the Definitive Edition

Genoese crossbowmen, here depicted as besieging Jerusalem in 1099, by Lazzaro Tavarone; however, they wore anachronistic clothing

Genoese Crossbowman in the HD Edition and Definitive Edition