The Genitour is the second unique unit of the Berbers in Age of Empires II HD: The African Kingdoms. It can be trained at the Archery Range once the Castle Age is reached. It is essentially a mounted Skirmisher. Since Genitours cost no gold, they are considered trash units.

Genitours can be upgraded to Elite Genitours in the Imperial Age.

The Genitour is the team bonus of the Berbers, so is a shared unique unit, i.e. it is available to any player allied with a Berber player.

Genitours are excellent counters against any archer-using opponent. Due to their comparatively high hit points and attack bonus against all archer units, Genitours emerge victorious against almost any archer unit in the game. They can also be used to hit-and-run against infantry, but the regular Cavalry Archer is much better suited for that due to its higher base attack. Encounters with cavalry and siege weapons should be avoided, because the Genitours cannot make use of any of their beneficial traits against these units.

Comparison to the Elite Skirmisher[]

Since both units are available from Castle Age and fill the same anti-archer role, it is fair to compare them. While in general similar in terms of use on the battlefield, the Genitour has advantages and drawbacks in comparison with a standard Elite Skirmisher. It is faster, has significantly more hit points (especially for civilizations with access to Bloodlines), and can hit-and-run against infantry. With the Elite upgrade, it even has +1 attack over Elite Skirmishers. On the other hand, it requires twice the amount of food to train, has -1 range and is vulnerable to anti-cavalry units like Camel Riders and Pikemen.

Whether or not to use Genitours depends much on the player's playing style, their civilization, and the current situation. For the Berbers, Genitours are usually preferred in the Imperial Age, because they fit in nicely with the Berber cavalry army and do not lag behind like Skirmishers do. In general, Genitours are favorable against Cavalry Archer using civilizations and, naturally, for the Turks as they lack Elite Skirmishers and have fantastic Genitours with their Sipahi technology. 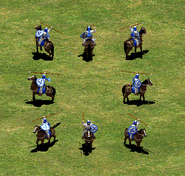 Though they normally cannot train mounted units, Native American civilizations are able to train Genitours when allied with a Berber player.

An artist's depiction of Berber horsemen clashing with Christian Visigoths in the Battle of Guadalete, 712 AD

Genitour in the HD Edition and Definitive Edition 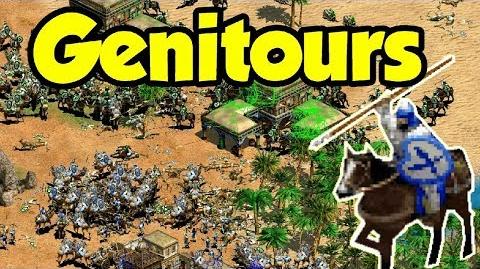