Age of Empires Series Wiki
Register
Don't have an account?
Sign In
Advertisement
in: Age of Empires II, Cavalry heroes, Dynasties of India

5
General Araiyan is a cavalry hero in Age of Empires II: Definitive Edition - Dynasties of India. He has a unique appearance. As a hero, he cannot be converted and can regenerate health.

He is featured in two scenarios of the Rajendra campaign: The Successor and Sacred Waters.

Araiyan Rajarajan was also known as Vikrama Chola (Tamil: விக்ரம சோழ சோழியவரையனான அரையன் ராஜராஜன், Vikrama Chozha Chozhiyavaraiyanaan Araiyan Rajarajan). He was the younger son of Rajaraja I. Araiyan was the Dandanatha or commander-in-chief of the chola army during the reign of his brother Rajendra Chola. He was also the highest ranking general among other 43 generals of Rajendra I who led the Chola expedition to North India. 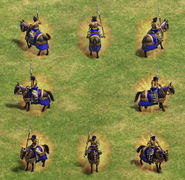 Many views of the General