Age of Empires Series Wiki
Register
Don't have an account?
Sign In
Advertisement
in: Age of Mythology, Tale of the Dragon, Cavalry,
and 3 more

16 feet
The General is a Chinese cavalry unit in Age of Mythology: Tale of the Dragon. It can be trained at Castle and has a build limit of 3.

The General can boost nearby ally human and hero units' attacks by +50% for a short time by battle-crying, similar to Arkantos or Einherjar. Range: 10 meters. Recharge time: 20 seconds. Damage to Enemies inside the Area: 5 hack.

Generals are a very special unit in a Chinese army, but also one that is very expensive. Their acquisition can put a needless dent in the Chinese economy if they are used without purpose.

While their stats are generally great, lacking only in attack, they are not meant to be used as combat units, but as support, thanks to their morale boost, similar to the Einherjar's. To be most effective, they need to be escorted with a sizeable army, ideally consisting of masses of affordable Halberdiers coupled with cavalry, such as War Chariots and Cataphracts.

The General must be well protected by his army, especially from myth units (like Cyclopes and Carnivorae), as he doesn't count as a hero, and can be destroyed by them, sending 200 gold and food invested down the drain. Also, Generals are susceptible to god powers like Spider Lair, Curse, Carnivora and Chaos.

Due to being classified as a human soldier, coupled with its relatively high cost and glass-cannon-esque function, the General is not regarded as a particularly effective unit by the community. 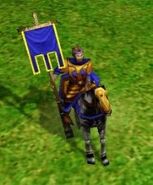 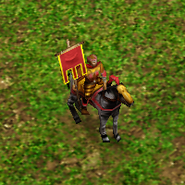