The Gazelle is a fast-moving kind of antelope. It appears as a food source in both Age of Empires and Age of Mythology.

2
Gazelles in Age of Empires usually appear in groups of five or more. They run away when attacked or if a unit moves close to them. Like all creatures in Age of Empires, the amount of meat available after the animal is killed diminishes as time passes, so it is best to use multiple Villagers to gather from them.

Although Gazelles are docile and do not attack, they have an annoying tendency to scatter to the wind when attacked, which can make it a bit of a chore to hunt them. Gazelles can also be pushed towards a Storage Pit or Town Center for quicker gathering, although as this requires a considerable amount of micromanagement, it may not be worth the effort. Gazelles also will often fall victim to Lion attacks, and any lone Villager should be on the look out for them when hunting Gazelles.

Gazelles hunted by a Villager

Gazelles in the Definitive Edition 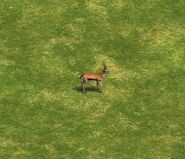 1
In Age of Mythology, Gazelles are herd-animals of Egyptian lands, similar to the Deer of Greece and the Elks of Scandinavia. As they have few hit points and do not retaliate, they are a quick and easy means of gathering food. Set Pharaohs can summon Gazelles of Set from the Classical Age.

Gazelle are small members of the antelope family. Thompson's gazelle (one of the most abundant African gazelle species) live in male, female or mixed herds of about 60 individuals, but can form gigantic herds of more than a thousand when migrating. They can run consistently at speeds of over thirty-five miles an hour for about fifteen minutes and has been known to reach up to 50 miles an hour when running from predators, including the cheetah. When a gazelle leaps vertically into the air, it is called "pronking".

The Thompson's gazelle has black stripes on its face and body that help break up the animal's outline and makes it harder to see from a distance. Both males and females have horns, though the latter are shorter. They eat short grasses that other grazers leave behind."
—In-game help section 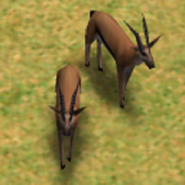 Two Gazelles in-game
Add a photo to this gallery

Retrieved from "https://ageofempires.fandom.com/wiki/Gazelle?oldid=238283"
Community content is available under CC-BY-SA unless otherwise noted.