The Gatling Gun is an artillery unit in Age of Empires III: The WarChiefs that is unique to revolting European civilizations and can be trained at the Artillery Foundry.

The Gatling Gun is unusual compared to the other artillery pieces in the game, with the exception of the Organ Gun; it is the precursor to modern-day machine guns and fires projectiles at a rapid rate, which is useful in killing enemy infantry units at a brisk pace. The Gatling Gun becomes available to players if they choose to revolt from their European civilization in the Industrial Age. While devastating against infantry they are less effective against cavalry and buildings, doing reduced damage against them. However, due to their high rate of fire they can still do good damage against them if in groups. It is inferior to the Organ Gun in multipliers, attack, range, Line of Sight, upgrades and age, but is available to every civilization.

Choosing George Washington as the revolutionary leader will increase the Gatling Gun's hit points by 25%.

As Gatling Guns are unique to revolutionary European civilizations, only technologies that their base civilizations have access to are shown in the following table:

As Gatling Guns are unique to revolutionary European civilizations, only their base civilizations' cards and other civilizations' TEAM cards are shown in the following tables (for the revolting player themselves, non-TEAM cards will only be applied if they are sent before revolting):

“The Gatling gun was invented by Richard Gatling in 1861. Although not precisely a machine gun, it nonetheless offered devastating firepower for its time. The operator of the gun would turn a hand crank, which rotated six gun barrels around a central shaft. Cartridges were continuously fed into the barrels as they made their rotation.

The Gatling gun saw its first limited action on the battlefields of the U.S. Civil War, where its rapid fire of up to 600 rounds a minute proved extremely deadly. The gun was also used in multiple conflicts worldwide during the latter half of the nineteenth and early twentieth centuries, until it eventually was replaced by the modern machine gun, with its automatic action.” 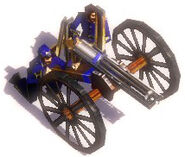 A Gatling Gun in Bombard mode 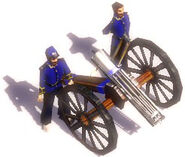 A Gatling Gun in Limber mode 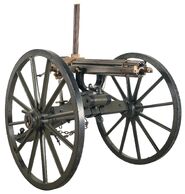 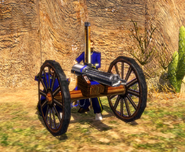 The Gatling Gun in Bombard Mode 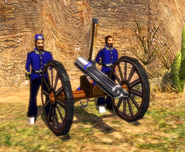 The Gatling Gun in Limber mode 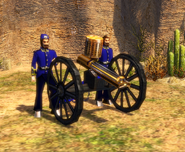 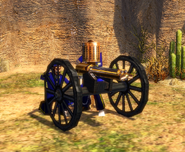 Gatling Gun model after researching Rabaulds in Bombard mode
Add a photo to this gallery
Retrieved from "https://ageofempires.fandom.com/wiki/Gatling_Gun?oldid=258593"
Community content is available under CC-BY-SA unless otherwise noted.