The Galley is a military naval vessel in Age of Empires III that is unique to the Ottomans. It replaces the Caravel and can be trained at the Dock once the Commerce Age is reached.

Like the Caravel, the Ottoman Galley is a light scout craft that can be used for scouting, fishing, and supporting heavier ships. Like most military vessels, the Galley can also be used to transport units, up to 50 from one location to another. It is more fragile than the Caravel, but possesses faster movement and a stronger attack.

One of the Galley's biggest advantages is its speed. This makes them effective for scouting undiscovered territory and transporting military units through the sea. Because of its low amount of hit points, Galleys in general should not be individually sent to naval combat towards enemy ships, especially Frigates which can rip it apart in a matter of seconds. Thus, it is strongly advised to research technological improvements from the Dock as soon as possible.

Broadside Attack: Fires a volley of cannon shots at an enemy ship within attack range, with each shot doing 80 siege damage. 60 seconds cooldown.

As Galleys are unique to the Ottomans, only technologies that they have access to are shown in the following table:

As Galleys are unique to the Ottomans, only their cards and other civilizations' TEAM cards that are shown on the following tables: 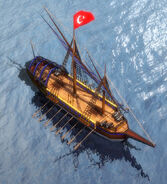