All except Aztecs and Malians

The Galleon is a naval vessel in Age of Empires II that can be trained at the Dock once the Imperial Age is reached. Galleons are crucial in maintaining control of the seas. As the standard ship for most civilizations, they should be built in numbers so they can effectively take out enemy navies. In groups, they can destroy Demolition Ships and enemy Galleons easily, but are vulnerable to Fire Ships.

Galleons are available to all civilizations except for the Aztecs and Malians.

The Galley line units are the backbone of any navy, War Galleys and Galleons are a very cost effective way to deal with Cannon Galleons and Demolition Ships if they are micromanaged properly. They are also useful in shoreline combat against enemy units and shoreline buildings with the exception of towers, Castles, and siege units. War Galleys work a lot better in large numbers, and they must be paired with Fire Ships in most cases, and are excellent escorts for Transport Ships.

The Galleon's main counter unit is the Fire Ship, but Demolition Ships may also be a problem in many circumstances. Longboats and Turtle Ships are also a threat, and siege units like Trebuchets, Onagers, and Bombard Cannons can be devastating against an army of Galleons in shoreline combats. Also, Monks can be dangerous, especially without Faith researched.

The Galley line, with the Galleon on the right 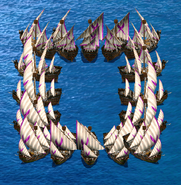 A group of Galleons

All Galleons in The Age of Kings and The Conquerors

All Galleons introduced in the HD expansions 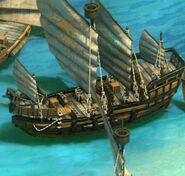 A Southeast Asian Galleon in the Definitive Edition 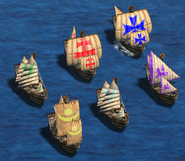 All Galleons in the Definitive Edition
Community content is available under CC-BY-SA unless otherwise noted.
Advertisement