The Galleass is a military naval vessel in Age of Empires III: Definitive Edition - Knights of the Mediterranean that is unique to the Italians. It replaces the Galleon and can be trained at the Dock once the Commerce Age is reached.

As with Galleons, Galleasses are classified as siege units, making them resistant to defensive structures; Outposts and Town Centers deal half damage against them.

The Galleass must be close to the shore to train the units, and will also be unable to move and attack while doing so.

As Galleasses are unique to the Italians, only technologies that they have access to are shown in the following table:

As Galleasses are unique to the Italians, only their cards and other civilizations' TEAM cards are shown in the following tables:

Galleass image from the Compendium section 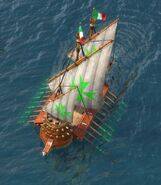