Age of Empires Series Wiki
Register
Don't have an account?
Sign In
Advertisement
in: Age of Empires II, Infantry heroes, Gajah Mada, Rise of the Rajas

Gajah Mada is a campaign in Age of Empires II HD: Rise of the Rajas. It is based on the exploits of the real-life Gajah Mada (ca. 1310 – ca. 1364), the Mahapatih (equal to a viceregent) of the Majapahit Empire known for bringing the empire into the peak of its glory; at its zenith, the Majapahit Empire had controlled roughly what would be part of Indonesia today. He is also famous for his Sumpah Palapa ("Palapa Oath"), where he vowed to not consume any food with spices until all of the Indonesian archipelago (then known as Nusantara) belongs to the Majapahit Empire. Today he is remembered by the people of Indonesia as one of their greatest heroes.

5
Gajah Mada is an infantry hero found in the titular campaign and in the Scenario Editor. He is displayed as a two-handed-sword-wielding infantry with his own unique sprite. Boasting massive amounts of hit points and attack damage, he is one of the strongest heroes in-game. He makes two appearances in Unconditional Loyalty and The Pasunda Bubat Tragedy. If he is killed during the campaigns, the game is not lost. As a hero, he cannot be converted and can regenerate health.

The Gajah Mada campaign consists of 5 scenarios. The player plays as the Malay, and the player color is red.

The campaign is narrated by Gajah Mada himself, who had been exiled in the aftermath of the Battle of Bubat. 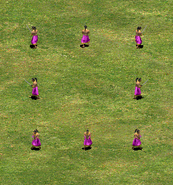 Gajah Mada in the Scenario Editor

Rise of the Rajas box art, Gajah Mada is the person to the center, one on the right is Bayinnaung, and in the left end is Suryavarman I

A statue of Gajah Mada in front of the Telecommunication Museum on Taman Mini Indonesia Indah, Jakarta 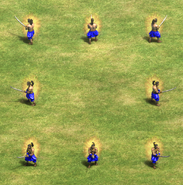 Gajah Madah in the Definitive Edition

The Gajah Mada campaign map before the Definitive Edition
Community content is available under CC-BY-SA unless otherwise noted.
Advertisement