In Age of Empires, if a human unit, Sheep, Turkey, or Horse is placed under Gaia's control in the Scenario Editor, it will become the possession of a player's team should one of their units come across it. This is a common method used in campaigns, and can sometimes be used to place secret units on a map, obtainable through exploration.

In Age of Mythology and Age of Empires III, only units with the AutoConvert action in the prototype files exist, such as herdables, Osiris Piece Carts, and Plenty Vaults. Gaia-aligned units, if unable to be converted, will attack other units of any other team if the former unit is capable of combat.

All predator, huntable, and herdable animals can wander in a specific area, whilst in Age of Empires and Age of Empires II, non-herdable prey animals will run away from non-Gaia units. This was meant to feature in Age of Mythology but was cut before release. In Age of Empires III, huntable creatures will only run when attacked by Settler-type units.

Gaia units in Age of Mythology.

Another screenshot of Gaia objects in Age of Mythology.

A Gaia-aligned Avenger fighting off units from two seperate teams in Age of Mythology. 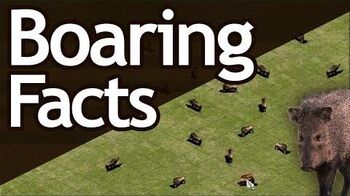