Age of Empires Series Wiki
Register
Don't have an account?
Sign In
Advertisement
in: Age of Empires III, The WarChiefs, Fortress Age,
and 2 more

The Fusilier is a French ranged heavy infantry and mercenary unit in Age of Empires III: The WarChiefs.

Reflecting its name's origins, the Fusilier has been changed from Swedish to French in the Definitive Edition.

The Fusilier is effective against most infantry and quite deadly against light cavalry. It has high hit points, a high base (siege) attack, and deals damage multipliers at range against Shock Infantry and light cavalry, putting it somewhere in between a Musketeer unit, and a Skirmisher unit. The Fusilier is incredibly powerful, and is a strong all-round unit, only being especially weak to Grenadiers, their equivalents, and artillery. With 12 Missionaries (Japanese ally), Unction, all attack improvement upgrades (Haudenosaunee) and cards (French and Indian allies), the Spanish Fusilier is a ranged infantry with the highest ranged attack, 152.6.

The Fusilier speaks Swedish in The WarChiefs and French in the Definitive Edition, using the French Grenadier's dialogue files. The old Swedish sound sets are reused by the Swedish Crossbowman.

Fusiliers in melee, with their rapiers drawn out

One of the Fusilier unit's special melee animations: a low thrust with the rapier. 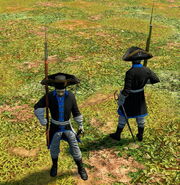 An in-game Fusilier in the Definitive Edition
Community content is available under CC-BY-SA unless otherwise noted.
Advertisement