The Fune is a military naval vessel in Age of Empires III: The Asian Dynasties that is unique to the Japanese and can be trained at the Dock once the Commerce Age is reached. It functions similarly to the European Caravel.

In terms of usefulness and cost compared to the Caravel, the Fune are weaker, causing less damage per cannonball and also have 2 less range. However, they have two advantages, concerning their sailing speed and Rate of Fire, as they boast a slight advantage of 9.0 speed rather than 8.5, while they fire once per second, making them excellent for naval hit-and-run operations, by shelling land positions, or attacking Fishing Boats. They are also ideal (in small groups) for exploiting naval treasures.

Broadside Attack: Fires a volley of cannon shots at an enemy ship within attack range, with each shot doing 50 siege damage. 60 seconds cooldown.

As Fune are unique to the Japanese, only technologies that they have access to are shown in the following table:

As Fune are unique to the Japanese, only their cards and other civilizations' TEAM cards are shown in the following tables: 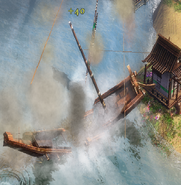