(Freeze) 4 feet
The Frost Giant is a myth unit available to the Norse if Skadi is worshiped at the Heroic Age, or Hel is worshiped in the Mythic Age.

Freezes an enemy unit in place for 20 seconds. Frozen units are immune to Myth unit special attack, but are helpless to attacks by enemy units. Requires 15 seconds to recharge.

It has a fair amount of HP and attack and are useful against human units. Their special attack is what makes them valuable additions to an army, they use their breath to freeze units in place, leaving them completely helpless to attack. It is best to micromanage Frost Giants to make them target the strongest units in an enemy army. This will leave those units vulnerable to attack and will let them fall quickly, since its Frost breath will not give targeted unit extra armor (unlike the Frost god power). This attack will not work on heroes, who will slay Frost Giants with ease.

The thurses, also called frost or rime giants, were among the first of the giants created when the world began. As opposed to the brutish Jotun, or mountain giants, the frost giants were ancient beings, symbolizing the time before the gods existed. They lived in the realm of Jotunheim, one of the Nine Worlds of Norse mythology, along with Muspellheim and Midgard. Jotunheim was the land of giants, and their leader was the frost giant jarl, Thrym ("uproar"). He was an archenemy of Thor, and once stole his hammer, Mjolnir, and also demanded Freyja for a wife.

As the tale goes, Thor dressed up as Freyja and went to retrieve his hammer. During the feast, the giants were amazed that "Freyja" ate an ox, several salmon, and large tankards of mead. Loki made the excuse that "Freyja" had not eaten in days because she was so excited to be married to the king of the giants. When Thrym peeped under "Freyja's" veil and saw Thor's beard, Thor threw off his disguise.

"Thor's heart laughed within him when he saw his hammer. First he struck down Thrym, the King of the Thurse, and then he slew all the giant's kin. He also killed the giant's poor sister who had begged for a bridal gift. Instead of shillings she received blows and instead of rings, a hammer hit. And thus Odin's son retrieved his hammer." -- Thrym's Lay from the Poetic Edda 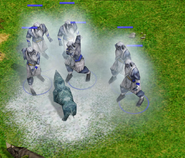 Wikipedia has an article about:
Jötunn
Community content is available under CC-BY-SA unless otherwise noted.
Advertisement