Age of Empires Series Wiki
Register
Don't have an account?
Sign In
Advertisement
in: Age of Empires II, The African Kingdoms, Maps

Unlike other maps featured in the expansion, Front Line offers a unique blend of both African and European terrain merged into one.

Players start out in the center of the map and are all positioned diagonally from each other. In team matches, teams will occupy one side of the map and their Town Centers are extremely close by each other. The enemy will be not too far away either and players will have to rely on team coordination and communication to conquer their enemies and win the match.

Players will start out with a nearby herd of Goats like most other maps featured in the expansion. This will allow for a steady and nourishing supply of food. A pair of massive Elephants will be found nearby and will dwarf the other animals in size. However they will aggressively trample and attempt to kill any Villagers trying to hunt to them. Herds of Zebras will also be found nearby as well as Forage Bushes to gather berries.

The forests of the map will oddly consist of palm trees and they will dominant the tree landscape throughout the map. In the central savanna of the map, trees will not form in forests and will be found scattered throughout the map. Large forests of Pine will however grow on the edges of both of the maps and will give the map its rectangular shape, chopping down the trees for wood will be up to the player to decide.

The thick forests of pine covering the edges of the map 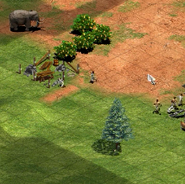 A blend of dry cracked terrain and grassy savannas
Community content is available under CC-BY-SA unless otherwise noted.
Advertisement