Frigates are available to European civilizations except the Knights of St. John (Act I: Blood campaign), and the Indians.

The Frigate, with a base hit points of 2000, it has 800 more than the next warship, the shore-ravaging Monitor. As the Monitor can't really fight anything tougher than a Caravel, this is the high-end ship-to-ship warship of choice for use past the Fortress Age. Moreover, because of its long sight radius and relatively good speed for its large size, it can also double up for exploration. Like all warships, the Frigate can transport 50 units, and blast close-to-shore buildings and units. However some buildings such as fully upgraded Outposts or Forts will decimate the ships. The Frigate can be upgraded to an Imperial Age Man-of-War (Ship of the Line). Frigates can also be upgraded at a Dock with the Armor Plating and Carronade bonuses.

Broadside Attack: Fires a volley of cannon shots at an enemy ship within attack range, with each shot doing 80 siege damage. 60 seconds cooldown.

"Frigates changed a lot over time, but began as lean, fast, well-armed ships used for scouting, raiding trade routes, and filling in the line of battle when the larger battleships were scarce. Early frigates carried messages and important passengers. Later, their single deck of 20 to 30 cannon was doubled to two decks of 40 to 60 cannon. British frigate captains still using the swift, lighter frigates were ordered not to engage the heavier, deadly American frigates unless the odds were two-to-one in the British captain's favor. 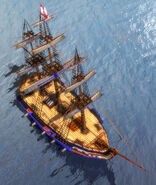 Retrieved from "https://ageofempires.fandom.com/wiki/Frigate?oldid=284984"
Community content is available under CC-BY-SA unless otherwise noted.