Frederick is confident, grandiose, and forthright. He will let the player know if he thinks they are weak. He often boasts about how the New World will be his empire and is prideful of his armies.

Frederick mainly relies on cavalry-intense armies in most of his matches, as he will almost always field Uhlans and War Wagons as the backbone of his army. These are typically complemented by Falconets and Horse Artillery (if The WarChiefs is installed) to give him some extra firepower. Frederick will also use Doppelsoldners and Skirmishers on occasion, and will generally upgrade them if he can. He originally trains Landsknechts when he is at a low level, but will quickly swap them out for other nation cards as he levels up.

Frederick's deck also shows support in his cavalry, as he unlike the other AIs which usually have a small military and high economic focus, Frederick does run a few cavalry improvement cards in his deck.

In terms of defense, Frederick is quite easy to overwhelm as he does not willingly build outposts. When attacking, it is best to have siege units aim his stables and artillery foundries, to prevent him from training defenders.

One more thing to note is that Frederick is also one of the more aggressive AIs. He usually ages up to the Commerce Age pretty fast and likes to go Fast Fortress. In the Commerce Age, he will attack almost always as soon as he has military units. If he does decide to go treasure hunting, the player might get attacked later but he still might send some Uhlans to raid Settlers/Villagers. But if he doesn't go treasure hunting, he will usually attack with 2-5 Uhlans, 1-3 Doppelsoldners, and 5-9 Crossbowmen. Most of those units he attacks with come from his military shipments.

In the Fortress Age he likes to ship his Fort Wagon right away and build the Fort as close as possible to the player. 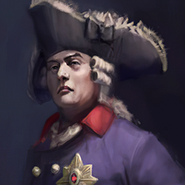 Wikipedia has an article about:
Frederick the Great
Community content is available under CC-BY-SA unless otherwise noted.
Advertisement