Age of Empires Series Wiki
Register
Don't have an account?
Sign In
Advertisement
in: Greek buildings, Age of Mythology, Heroic Age,
and 2 more

2,100
The Fortress is the Castle-type building for the Greeks in Age of Mythology.

Along with the Chinese Castle, it is the most expensive of the five cultures' buildings but has the most firepower. Though not as resilient as the Egyptian Migdol Stronghold, it is stronger than the Norse Hill Fort, and Atlantean Palace.

Fortresses fire multiple arrows at enemies within range, mowing down those with low pierce armor. They can be used to bolster a town's defenses, strengthen a player's claim to a neutral area, or as a forward base. However, Fortresses are defenseless against melee attacks unless they are upgraded with Boiling Oil, and, while formidable at defense, they are not invincible. Siege weapons either outrange them or take little damage from their attacks. In a large enough group, human soldiers can destroy a Fortress, though not without suffering substantial losses.

The first great civilization in Greece, the Mycenaean of Trojan War fame, was a collection of city-states, each centered on a hilltop fortress. The competition between the city-states for farm and orchard lands, plus the threat of barbarian raids from the north, made strong defense critical for survival. The typical Fortress used cliffs, stone walls, strong gates, and winding, exposed approaches to create a powerful defensive position. In addition, the Fortress functioned as a palace, armory, and administrative center for many cities. 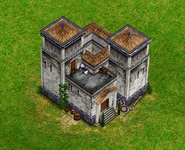 Greek Fortress in the Heroic Age

Greek Fortress in the Mythic Age

Greek Fortress in the Southeast in early 2002 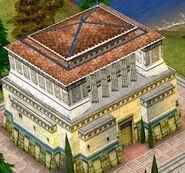 Greek Fortress as it appeared in 2001
Community content is available under CC-BY-SA unless otherwise noted.
Advertisement