1,800
The Fortified Wall is a wall in Age of Mythology. It is an upgrade of the Stone Wall and is used by the Egyptians, Chinese, and Greeks.

For the Greeks, the Fortified Wall is the final wall upgrade. 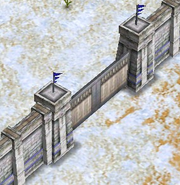