Age of Empires Series Wiki
Register
Don't have an account?
Sign In
Advertisement
in: Infantry, Age of Mythology, Cheat units

Villagers (10)
Forkboy is a cheat unit in Age of Mythology. By typing TINES OF POWER into the chat bar, players receive the Forkboy at their Town Center. It appears as a cartoon farm boy in overalls wielding a trident that can increase its length in battle.

Unlike other cheat units, he is a specific type of unit, an Infantry unit, which means he is weak to Archers. As a matter of fact, due to its lower (but still relatively high) speed, HP and armor, the Forkboy is the weakest cheat unit available. It is vulnerable to the special abilities of Myth Units such as the Cyclops or the Carnivora and to god powers such as Curse. But unlike Lazer Bears or Flying Purple Hippos, they can be upgraded with Armory technologies and any other technologies that improve units in general. Some god powers, such as Bronze and Flaming Weapons, will also enhance them. Finally, they can be massed easily by simply typing their cheat code over and over in the chat box. 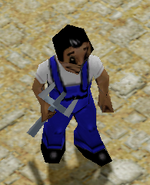