The instant food collection only works on the player's own Farms

The Folwark is an economic building in Age of Empires II: Definitive Edition - Dawn of the Dukes that is unique to the Poles and replaces the Mill[note 1]. It does everything a Mill does, but occupies 3×3 tiles, has more HP, costs more, takes slightly longer to build, and immediately collects 10% of the food provided by nearby Farms upon being seeded or reseeded, in addition to providing 5 population.

Compared to the Mill, the Folwark occupies 3×3 tiles, costs 125 wood, takes 40 seconds to build (as opposed to 35 seconds for Mills), has 400 more HP, and grants 5 population space upon construction, akin to Houses. Considering its size, players can fit 8 Farms around perfectly as those also have a size of 3×3 tiles.

The effective radius of the Folwark's instant food collection ability is 4 tiles (from the Folwark's edge), and the Farm must fully fit within this radius (i.e., only one tile gap or no gap at all between the Farm and the Folwark are allowed to trigger the ability). The ability only works for Farms seeded around a preexisting Folwark and will not trigger upon Folwark's construction around preexisting Farms. Considering this, players should use Folwarks for farming instead of Town Centers unless the player is unprotected. One way to circumvent the lack of protection is to place them 3 tiles away from a Town Center. That way, the player can build Farms between the Folwark and the Town Center, and still have Town Centers shelter their farmers while using the Folwark gathering ability at the same time.

The Folwark's instant food collection is tied to the player which built them, giving the following implications:

Considering that the Folwark replaces the Mill, it should be used as one of the needed buildings for advancing to the Feudal Age. Folwarks can also queue Farms and have the auto-reseed button like a normal Mill.

As Folwarks are unique to the Poles, only technologies that are available to them are shown in the following table:

Folwark is a Polish word for a primarily serfdom-based farm and agricultural enterprise, comparable to a manor.

When placed for civilizations other than Poles without researching the Folwark technology, the Folwark is essentially a 3x3 House which allows villagers to automatically drop off food. Villagers cannot be forced to drop off food. While naturally not having Farm upgrades, this Folwark also does not have auto-reseed or farm queue options. It does have the range indicator, but food is not collected automatically. 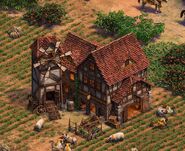 Appearance in Dawn of the Dukes Trailer 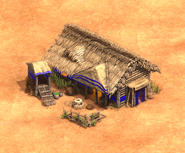 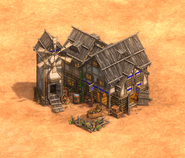 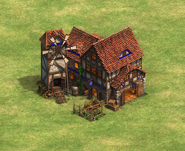