Age of Empires Series Wiki
Register
Don't have an account?
Sign In
Advertisement
in: Age of Empires III, Artillery, Colonial Age,
and 3 more

The Flying Crow is an artillery in Age of Empires III: The Asian Dynasties that is unique to the Chinese and are trained automatically by the Confucian Academy wonder or can be shipped from the Home City. Similar to the Rocket, it sends a gunpowder-powered missile effective against units and buildings.

Flying Crows can be fielded very early in the game if the Confucian Academy is built to advance into the Commerce Age, though it takes four minutes for the wonder to produce one, which is about twice the training time of a Heavy Cannon.

The Flying Crow is automatically upgraded at every Age up starting in the Fortress Age.

As Flying Crows are unique to the Chinese, only technologies that they have access to are shown in the following table:

As Flying Crows are unique to the Chinese, only their cards and other civilizations' TEAM cards are shown in the following tables:

A Flying Crow in Bombard mode 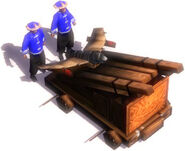 A Flying Crow in Limber mode 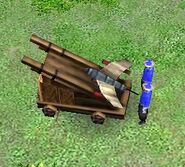 Flying Crows can become a serious threat to infantry.

Model of the winged rocket-bomb (flying crow of Huolongjing) to showing the rocket underneath. 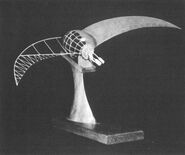 Reconstruction of the rocket-containing flying bomb to show the structure of the wings. It is called "free-flying enemy-pounding thundercrash bomb" (feikhung chi tsei chen-thien-lei phao).
Community content is available under CC-BY-SA unless otherwise noted.
Advertisement