Age of Empires Series Wiki
Register
Don't have an account?
Sign In
Advertisement
in: Unique units, Age of Empires III, Dutch,
and 4 more

The Fluyt is a naval vessel in Age of Empires III that is unique to the Dutch, replacing the standard Galleon, and can be trained at the Dock once the Commerce Age is reached. Although similar in function, it has less hit points and more attack.

As with the Galleon, the Fluyt is classified as a siege unit, making it resistant to defensive structures; Outposts and Town Centers deal half damage against it.

The Fluyt is a moderately fast and powerful military ship that is able to garrison soldiers. It is also very resistant to ranged attacks from enemy units and building fire, making them effective in both combat and transportation. It can also be used to train military units on any coastline, making logistics more convenient. Compared to a standard Galleon, it trades hit points for more attack, making it closer to a Caravel in terms of an attack role than a Galleon. Moreover, it is quite a fair bit cheaper, costing 300 coin instead of 500.

The Dutch have a Home City Card available to them in the Fortress Age, which delivers three Fluyts. Combined with the "Admiral Tromp" card, which boosts the Fluyt's HP by 75%, they can form a strong navy.

The Fluyt must be close to the shore to train the units, and will also be unable to move and attack while doing so.

As Fluyts are unique to the Dutch, only technologies that they have access to are shown in the following table:

As Fluyts are unique to the Dutch, only their cards and other civilizations' TEAM cards are shown in the following tables: 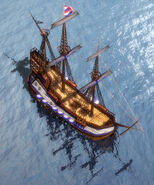