Fluffy is a Dog cheat unit in Age of Empires III. Fluffy can be spawned by entering the cheat code "we <3 fluffy!1!" and can also be placed in the Scenario Editor. According to the game's texts, Fluffy is the world's ugliest dog. Fluffy, indeed, looks skinny, filthy, and has monster-like characteristics. Despite these, Fluffy remains a very powerful unit, but can still easily be killed by ranged attacks. 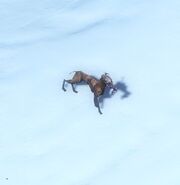