Age of Empires Series Wiki
Register
Don't have an account?
Sign In
Advertisement
in: Age of Empires II, Lords of the West, Infantry

Town Center, available after upgrading all existing villagers with the Flemish Revolution technology.

The Flemish Militia is the second unique unit of the Burgundians in Age of Empires II: Definitive Edition - Lords of the West. It is an infantry unit comparable to a Champion, but with a sizeable attack bonus against cavalry, or a Kamayuk without range.

Unlike the Villager it upgrades from, Flemish Militia cannot build or repair buildings or gather resources.

The Flemish Militia becomes available after researching the Flemish Revolution unique technology at the Castle in Imperial Age. It provides an immediate military advantage, as it turns all of the player's Villagers into military units. The obvious drawback is that Flemish Militia can no longer build structures, repair, or gather resources, so Flemish Revolution disrupts the player's economy for a long period of time.

Because of this, choosing the proper moment to research Flemish Revolution would, in most cases, decide the outcome of a game. A strong Imperial Age economy relies on a large contingent of Villagers, so Flemish Militia can quickly swarm the battlefield in a final push attempting to break a resilient enemy or a desperate last stand in hopes of an eventual turnover.

Fishing Ships, Trade Cogs, and Trade Carts, if present, will continue to provide resource income after researching Flemish Revolution. This can aid in rebooming if the game continues much longer. However, a high proportion of those units in one's economy will lessen the size and thus effectiveness of the resulting army of Flemish Militia.

As a unit, the Flemish Militia should not be considered as a variation of the Halberdier, but a Champion. Compared to the Champion, the Flemish Militia has an advantage of 5 HP and a disadvantage of 1 less attack, while the armor stats, Rate of Fire and movement speed are the same. The Flemish Militia also has a distinct advantage when facing cavalry due to an attack bonus. Against Eagle Warriors, though, the Champion has a clear advantage, dealing far more bonus damage to Eagles than Flemish Militia. Due to their better rate of fire, their damage output is much better than what the stats show, compared to a Halberdier. They have nearly 79% of the effectiveness of Halberdier vs cavalry and nearly 86% vs camels. These are rough estimates and do not cover every unit. As an edge case, Flemish Militia are nowhere near as effective against Cataphracts as Halberdiers are. Additionally, Flemish Militia do not have any innate bonus damage against structures (though they benefit from Arson), making them less effective than Champions at destroying buildings.

With 15 HP and 1 melee armor advantage over the Halberdiers (as well as a greater rate of fire), the Flemish Militia has a decisive edge, combat-wise against foot (except Monks) and siege units. On the other hand, Halberdiers provide better value per resource spent, due to the heavier cost of the Flemish Militia, both in the case of future income lost from the Villagers and the cost of new units if one were to keep producing them. Similar to the Kamayuk, the Flemish Militia has better survivability and is more suitable to engage in combat with all types of units, except for the direct counters. Contrasted with the Halberdier, with weak stats and a slow fire rate of 3, the Halberdier does poorly against all non-mounted military units. It must also be noted that Flemish Militia (just like Kamayuks) are NOT affected by the damage bonuses that are dealt against the Spearmen armor class, i.e., they are not weak against Elite Skirmishers, and are less afflicted by arrow fire from Arbalesters and Heavy Cavalry Archers.

The Flemish Militia shares the common weakness of infantry against siege units, archers and fortifications. It is also ineffective against Cataphracts, who absorb all their bonus damage. Samurai are also very effective, as the Flemish Militia is treated as a unique unit. Slingers and Hand Cannoneers also deal with them relatively easily.

Units comparison in the Imperial Age[]

* Champion food cost can be reduced by Supplies, but not included here because Burgundians do not have Supplies.
^ The Elite Kamayuk's low attack is offset by the extra range, which helps it stack and attack easily.
‡ Viking Champions have the option to gain +5 and +4 vs cavalry and camels.
** The Halberdier's pierce armor is deceptive since it regularly takes bonus damage from Archery Range units, their variations and defenses. However, it doesn't take bonus damage from ranged melee, siege or naval units, so not all ranged or piercing units.

In the 12th and 13th centuries, the Flemish cities became increasingly rich and attracted more and more people from the countryside. The cities were also beginning to organize themselves militarily and established city militias.

All able-bodied men could be called up to serve in the city army in times of trouble and the city government kept records of the names of the burgesses and craftsmen who were subject to military service. In the early 13th century they mainly organized themselves according to the neighborhood in which they lived, but towards the end of the century they grouped themselves according to the craft to which they belonged. The city provided equipment and weapons, but most people owned their own armor and kept it at home.

A city militia is divided into a number of folds. A fold is about 600 men strong and is proportionally composed of contingents of the burgesses (per district) and the craftsmen (per craft). The larger the own population group, the more warriors have to be supplied. The weavers traditionally form the largest group in a fold. In times of war, these folds are combined to form the militia. Depending on the size of the campaign, the city government can mobilize one or more folds. Bruges, for example, can deploy about 12 fold at the beginning of the fourteenth century, and is able to assemble a maximum force of more than 7,000 men.

The primary task of the urban militia is to defend the city walls against enemy attackers. The territorial monarch can claim the various city militias to defend his borders. However, he cannot deploy them abroad without the consent of the aldermen. 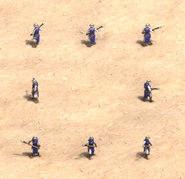 Different views of the female variant. 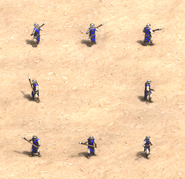 Different views of the male variant.

Sprite of the female variant.

Sprite of the male variant.

Flemish rebels fighting the french in the battle of the golden spurs. (guldensporenslag)

A Drawn based of the chest of courtrai.

The battle of the golden spurs depicted in the book "Grandes Chroniques de France."

An official artwork featuring (from left to right) the Priest, the female Flemish Militia, two Heavy Swordsmen and the Gbeto