Age of Empires Series Wiki
Register
Don't have an account?
Sign In
Advertisement
in: Age of Empires II, The Last Khans, Suicide units,
and 5 more
English

The Flaming Camel is the second unique unit of the Tatars in Age of Empires II: Definitive Edition. It is a suicide unit that can be trained at the Castle in the Imperial Age once Timurid Siegecraft is researched.

The Flaming Camel has the appearance of a Bactrian Camel carrying heaps of straw that catch fire whenever it moves. When it attacks the enemy or is killed, the Flaming Camel disappears in an explosion while dealing melee damage to any enemies nearby.

It is advisable to use Flaming Camels against large contingents of cavalry, despite the fact that they explode when used. Their bonus damage enables them to kill most kinds of cavalry in two or three blows while also dealing splash damage to all enemy units nearby.

Flaming Camels are probably one of the best counters against packed groups of War Elephants, Battle Elephants, Ballista Elephants, and Elephant Archers and Siege Elephants, with each blow dealing at least 200 total damage against said units (before armor and blast distance are taken into account and not considering the +25 bonus damage against siege units like Ballista Elephants and Siege Elephants). So, it is highly viable for a Tatar player to make use of Flaming Camels against civilizations that have access to an elephant unit. When used against cavalry, it is advisable to support them with Heavy Camel Riders so they can finish cavalry that survive the detonation.

Flaming Camels perform moderately well against buildings, as they deal +200 bonus damage to the Building armor class. Being a siege weapon, they must be used as a support unit for weakening or finishing an opponent settlement, but they are not as effective as Trebuchets and other siege weapons. However, they can be used in conjunction with siege units like Trebuchets, and cavalry like Keshiks, Cavaliers or Steppe Lancers, to make haste in leveling towns and buildings. This is specially useful in game modes like Sudden Death, or even Regicide.

Like Petards, Flaming Camels are a single-use unit. Nevertheless, Flaming Camels are inferior to them in the in an anti-building role. And like Petards, they also cost gold and have only one use: their course of action must be chosen wisely and/or with the adequate support of other units. As expected, Pikemen and Elite Skirmishers can be cost-effective against them.

Flaming Camels have no pierce armor and do not benefit from armor upgrades, so they are destroyed quickly by ranged units. Researching Husbandry can greatly compensate this, and pose a big threat towards big groups of cavalry archers when left unsupervised by the opponent. This is what gives them an edge against Petards as a unit killer (in a fashion like the Heavy Demolition Ship, but landbased). Similarly, making use of the Flaming Camels' speed overshadows their relative ineffectiveness against buildings, minimizing arrow fire taken from defensive structures like Castles, thus avoiding wasteful deaths.

The following table shows the number of Flaming Camels required to destroy the listed buildings. The numbers are calculated with fully upgraded (i.e. Masonry, Architecture, and Hoardings is researched) buildings.

Both units are "suicide units" and are strong vs buildings. In this regard, the Petard is a better specialist in taking down stone defenses and defensive structures, dealing huge amounts of damage to Town Centers, Towers, Castles, and Walls. But the Petard's attack has less of a relative effect on other buildings (while still dealing huge damage). On the other hand, the Flaming Camel deals the same amount of damage to all buildings, but it requires a higher amount of Flaming Camels to take down any kind of building. It is a less cost-effective anti-building unit than the Petard.

The only four technologies that benefit the Flaming Camel (aside from Kasbah, which requires the player to have an allied Berber player) are Conscription, Husbandry, Bloodlines, and Siege Engineers (as Tatars lack Heresy and Faith), while Petards from a standard civilization benefit from Faith, Heresy, Conscription and Siege Engineers. 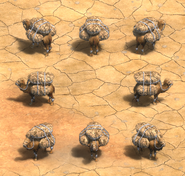 Multiple views of the suicide unit.

The unit's fire appears only when walking. 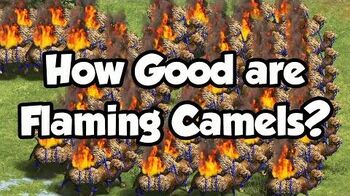