The Flamethrower is a ranged siege infantry unit in Age of Empires III: The Asian Dynasties that is unique to the Chinese and can be trained at the Castle once the Commerce Age is reached or (prior to the Definitive Edition) as part of the Black Flag Army.

The Flamethrower attack has a high Rate of Fire (the highest of all units) and deals splash damage with strong multipliers against infantry, buildings, and ships. However, it is countered easily by cavalry and other artillery as an infantry unit. Unlike true artillery units such as the Mortar, the Flamethrower can take some time to destroy buildings, especially with its short siege range. The Flamethrower is best used as a support unit for infantry against massed enemy infantry.

As Flamethrowers are unique to the Chinese, only technologies that they have access to are shown in the following tables:

As Flamethrowers are unique to the Chinese, only their cards and other civilizations' TEAM cards are shown in the following tables: 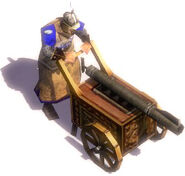 Flamethrower in the original version and Definitive Edition
Community content is available under CC-BY-SA unless otherwise noted.
Advertisement