The Flail Elephant is a melee heavy siege cavalry in Age of Empires III: The Asian Dynasties that is unique to the Indians and can be trained at the Castle once the Commerce Age is reached, and the Agra Fort wonder once it is upgraded to Red Fort. It excels at taking down buildings.

The Flail Elephant has a rapid siege attack, and a massive ranged resistance and can demolish buildings in seconds, but is fairly poor in combat, largely due to its low speed and vulnerability to heavy infantry and ranged cavalry.

Flail Elephants are very effective at taking out buildings such as Forts and Town Centers incredibly quickly, sometimes before the enemy is able to react. They are capable of dealing with artillery extremely effectively, if they are able to reach it; they are the only Indian heavy cavalry that has a multiplier against cannon and all of them share the trait of having low base damage. Thus, Flail Elephants can somewhat fill this weakness.

After "Professional Handlers" has been shipped, Flail Elephants become very population-effective damage sponges. As Mahout Lancers are quite easy to focus down (as well as expensive), and Sowars are quite fragile, Flail Elephants can offer a middle ground option to soak up ranged infantry fire to protect a player's ranged units. This is especially important for the Indians because they lack a massable artillery piece. Flail Elephants don't do a large amount of damage to units (although the splash damage somewhat compensates this), but can supplement armies as a tank unit and anti-artillery without taking too much population space.

Imperial Service (passive): The Mansabdar Flail Elephant increases the hit points and attack of Flail Elephants in a radius of 24 around them by 10%. 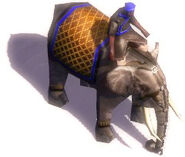 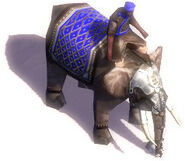 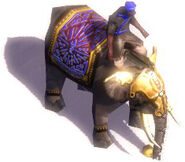 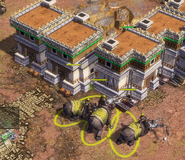 Flail Elephants using their mighty trunks to bring down buildings

Flail Elephant in the original and Definitive Edition
Community content is available under CC-BY-SA unless otherwise noted.
Advertisement