70
The Fixed Gun is a heavy artillery emplacement in Age of Empires III. It cannot be built, but is featured in the campaign and available in the Scenario Editor.

The Fixed Gun is a large gun turret and the most powerful weapon in Age of Empires III. It cannot be built by any means and is stationed in a certain area, but it can sometimes be repaired.

In the campaigns, Fixed Guns are weaker and can be captured or destroyed. There is also an older version of the Fixed Gun that is called Ruined Fixed Gun.

The Fixed Gun is featured in the original campaign, in "Act I: Blood" and "Act III: Steel".

In "Act III: Steel", when Amelia Black encounters the old Spanish Treasure Ships, the player is given the option to capture a Fixed Gun that is out of maintenance and old.

In the The WarChiefs expansion, during the scenario Breed's Hill in Act I: Fire, there are two Fixed Guns that Nathaniel Black and the Colonial Army can use against the British. The Fixed Guns are also found in The Battle of Yorktown scenario, northwest along the coast, on an island. The player can capture them from the British to fire at the enemy Outpost and ships.

In The Asian Dynasties, the British base in a scenario of Act III: India is protected by two Fixed Guns, both of which can be captured to level the British fortifications. The scenario is Company Confrontation.

Note that they will do anything to regain them, should the player capture them.

Usually Fixed Guns are near large bodies of water because of their effectiveness against enemy naval units.

The least effective way to destroy it is by attacking it using only units with short range. The most effective strategy is to advance to the Industrial Age and then build a couple of Monitors. These warships have a Mortar on them that has a special ability which is a powerful long ranged shot that has an even longer range than the Fixed Gun itself. If the Fixed Gun is constantly bombarded like this it will eventually be destroyed.

To protect a Fixed Gun that belongs to the player or an ally, build a Dock or an Artillery Foundry (not possible during Act III: Steel) near the Fixed Gun. Train a few units that corresponds to each building, preferably the strongest unit such as a Frigate or a Falconet (not possible during Act I: Blood) to protect it from close range attacks, or any other attacks that the Fixed Gun is not able to handle. The player needs protection for three reasons:

Note: The gun during Act I: Blood will never automatically target the fountain, it must be manually tasked to this job. If no enemies remain for you to kill (destroyed all enemy settlements), tasking the gun on the fountain will be an endgame timer as it can never switch targets. Leaving the gun idle after destroying all boneguard buildings and units will allow you to keep the map running, generating experience for Act II: Ice. 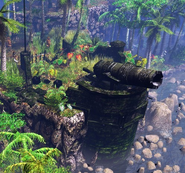 A Fixed Gun that is out of maintenance

The Fixed Gun featured in The Fountain of Youth

Capturing the British Fixed Gun to fire at enemy ships in The Battle of Yorktown
Add a photo to this gallery
Retrieved from "https://ageofempires.fandom.com/wiki/Fixed_Gun?oldid=284652"
Community content is available under CC-BY-SA unless otherwise noted.