20 feet
Fishing Ships in Age of Mythology are economic ships that are used to gather fish, providing food. They are trained at the Dock from the Archaic Age and are available to all civilizations. Egyptian Fishing Ships are also able to build Obelisks, Docks, and Lighthouses, albeit very slowly.

As fishing grounds in Age of Mythology yield unlimited fish, Fishing Ships provide a steady source of food throughout the game, as long as they are not disturbed by enemy warships. They also make decent naval scouts in the early game. They are completely defenseless, and as such, should never go too close to enemy-controlled waters.

For protection, Fishing Ships can garrison in Docks, which also allows them to return fire at enemy ships and naval myth units.

The seas off Egypt, Greece, and Scandinavia were important sources of food and had been harvested since prehistoric times. The technology of boats and further improvements in nets, navigation, boat capacity, traps, etc., all improved the efficiency and production of fishermen. We know from wall murals that Greek fishermen were taking bluefin tuna in Mycenaean times, a thousand years before the classical Greek age. The Norse were also great sea hunters and fishermen. Salted and dried fish could be stored for many months and was an important source of protein before the days of refrigeration. 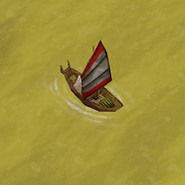