The Fishing Ship can build Fish Traps which are similar to Farms on water. Fish Traps take longer to build, but hold more food. Fishing Ships gather food faster from normal fish than from Fish Traps.

Fishing Ships gather food at a rate of 0.28 food per second from shorefish (i.e fish that is adjacent to the shore), and at the rate of 0.49 food per second from deep-sea fish (i.e all other fish). Provided that the Fishing Ship is close to a Dock and gathers from deep-sea fish, it will collect food significantly faster than Villagers collecting from Farms, who collect at a rate of 0.32 (taking into account the amount of time Villagers simply walk around the Farms without gathering). It can be noted that this means that Fishing Ships collecting from deep-sea fish collect food almost exactly 50% faster than Villagers collecting from Farms (while also being 50% more expensive than Villagers). However, unlike Farms, the fishing rate is highly dependent on the distance to the fish from the Dock; Once the deep-sea fish near the shore have been depleted, the traveling time back to the Dock can significantly decrease the effective collection rate. Building Fish Traps can deal with this issue, but they have a slightly lower effective collection rate due to the long construction time of the trap. However, once built, they provide a much greater amount of food (715 for 100 wood) per invested wood compared to a Farm (175-550, depending on upgrades, for 60 wood). In addition, once the Gillnets upgrade has been researched, Fishing Ships collect faster from Fish Traps than Villagers from Farms. 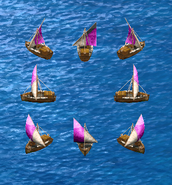 A group of Fishing Ships

A group of Fishing Ships in the Definitive Edition
Español
Community content is available under CC-BY-SA unless otherwise noted.
Advertisement