2
The Fire Ship is a Chinese naval military unit in Age of Mythology: Tale of the Dragon. Fire Ships are good against siege ships. They are similar to the Atlantean Fireship as they both deal damage by firing projectiles rather than ramming.

Chinese Fire Ships are arguably inferior to other hammer ships, as they have lower speed and HP and have a minimum range of attack which forces them to repeatedly back away from any melee attackers. They are especially vulnerable to arrow ships due to their low pierce armor. Any defenses on the shore should be avoided as well, though they can be effective at harassing enemy land units close to the shore or Docks. They gain more hit points from the Reinforced Ram upgrade than ramming ships to counteract their slightly lower base hit points.

What sets them apart from their Atlantean counterparts however, is their upgradeability; depending on the Heroic Age and/or Mythic Age minor god that is worshiped, they can have a flexible array of available myth technologies, that can help them adapt easily, whether concerning toughness, sailing speed or cost effectiveness. This arguably makes them better than the other available Fireship in Age of Mythology, and more competitive against hammer ships. 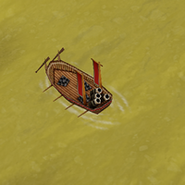