x2.0 vs. The Fountain of Youth

The Fire Ship in Age of Empires III is a suicide unit, a Caravel lit on fire. It rams itself into enemy buildings or ships, inflicting severe damage. Can be built by the Maltese through the Greek Fire card.

In the campaigns, it makes its first appearance in the third scenario of the Act I: Blood campaign, where enemy Fire Ships are used against the player's ships. They appear again in the eighth scenario of Act I and can be used to destroy the Fountain of Youth.

This burning ship explodes and inflicts a lot of damage when hits its target; however, it has very few hit points and is vulnerable to ranged attacks as it approaches. Caution is advised when encountering a Fire Ship; try to sink it before it reaches any of the player's units or buildings. If commanding a Fire Ship, try to reach the target as quickly and directly as possible, and try to avoid it getting hit, preferably by distracting the enemy or by guarding it with other ships. 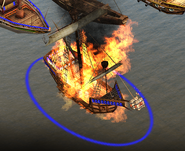 Three Fire Ships awaiting the player's commands in The Fountain of Youth?