Fire Ships are mostly used as a support unit for other naval vessels as the Fire Ships can sink down rapidly masses of Galleons, Cannon Galleons, and other Fire Ships. Fire Ships are a great escort for Transport Ships along with Galleons.

The Rise of Rajas

"The Byzantines alone in the West carried forward the ancient traditions of ship building into the Middle Ages. Their improvement over the trireme was the fire ship, a narrow and fast warship powered by both oars and lateen sails. The fighting power of these ships was provided partly by marines, archers, and catapults, but the secret weapon of the Byzantine navy was Greek fire. This extremely volatile mixture was squirted out of hoses from the bow of the fire ship and ignited on contact with air. Fire was a devastating weapon against wooden ships and the enemies of the Byzantines could not stand up to fire ships spraying Greek fire. Other civilizations acquired the secret of Greek fire at times, but it was so closely guarded and dangerous to use that it is lost today." 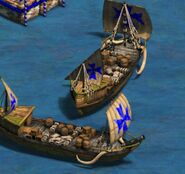 A couple of Mediterranean styled Fire Ships in the Definitive Edition
Add a photo to this gallery
Retrieved from "https://ageofempires.fandom.com/wiki/Fire_Ship_(Age_of_Empires_II)?oldid=263312"
Community content is available under CC-BY-SA unless otherwise noted.