Age of Empires Series Wiki
Register
Don't have an account?
Sign In
Advertisement
in: Age of Mythology, Tale of the Dragon, Heroic Age,
and 4 more

3-20 feet
The Fire Lance is a siege weapon (or "siege infantry") used by the Chinese in Age of Mythology: Tale of the Dragon. Although the Fire Lance is classified as both a human unit and siege weapon, it is considered neither an archer nor an infantry unit. As such, they are countered by units that deal bonus damage to siege weapons.

Note that Fire Lances do not get bonuses from Armory weapons technologies, but it gets attack bonus from the Engineers technology.

The Fire Lance functions similarly to the Atlantean Destroyer, as it is a human unit that is effective against buildings. It is not as heavily armored, but it moves slightly faster, and can attack from a decent range (though not one as impressive as the Greek Gastraphetes). It is the only anti-building unit the Chinese have access in the Heroic Age, and is not as good at taking fortifications down on its own, due to its lower attack stat. As compensation, it costs less resources and occupies less population, so the Fire Lance is easier to mass and can be quite effective in groups.

Fire Lances are also the only true anti-archer unit the Chinese have access to, as they deal +150% bonus damage to them. Against anything with a melee attack however, they are highly vulnerable. Fire Lances have a minimum range and infantry or cavalry units will easily push them back. Therefore, like siege weapons, they must be accompanied by units that can counter those. As it is also considered a human unit, it is vulnerable to the instant kill abilities of some myth units.

The good pierce attack also make Fire Lances quite effective against infantry. With Chang'e's Jade Rabbit technology and Draft Horses Fire Lances get a total speed of 4.7 m/s. With that speed they can outrun almost every foot unit of the game which make them quite useful for raiding and may be combined together with cavalry.

Tale of The Dragon[] 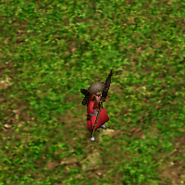