The Feitoria (Portuguese: "Trading Post") is an economic building in Age of Empires II HD: The African Kingdoms that is unique to the Portuguese and becomes available once the Imperial Age is reached. It generates 1.6 food, 0.7 wood, 1.0 gold, and 0.3 stone per second, which is comparable to the efficiency of roughly 9 Villagers in Post-Imperial Age. It generates these resources without the need of Villagers, but takes up 20 population.

There is no limit to how many Feitorias a player can build other than the population limit. Players can still build one as long as they have at least one population headroom (queued units will count against this headroom). While it is not seemingly worth the population space (20 Villagers can easily gather more resources per minute than a Feitoria), it is difficult to place a numeric value on the generation of gold and stone. One thing to note, though, is that Villagers die easily to raids, while the Feitoria generally requires siege weapons to destroy quickly.

The Feitoria is most suitable for the late game when resources such as gold and stone become scarce, especially in free-for-all games and 1-vs-1 games, as, in those settings, trading with other players is not an option. Players must be sure to place it in well-defended areas, in order to protect its slow trickle of resources. In the rare event that players deplete the wood on the map (which may happen on island maps), Feitorias are also worth the investment, as they also provide wood.

Another potential tactic is to rush Feitorias. While a Feitoria is less efficient than 20 Villagers, it can be produced much faster and does not require additional Town Centers. As a result, one can quickly reach maximum population and make a push before the opponent has the time to grow their economy to the same level as the player's.

Feitorias can be converted, so Portuguese players must be wary of enemy Monks. However, the Portuguese can research Heresy which will prevent the Feitoria from being used by the enemy once converted. In the event that a player manages to convert a Feitoria, its population space of 20 will be imposed on the new owner.

As Feitorias are unique to the Portuguese, only technologies that are available to them are shown in the following table:

Elmina Castle, built in 1482 in Ghana, was once an important Portuguese Feitoria.

A Feitoria in the Definitive Edition 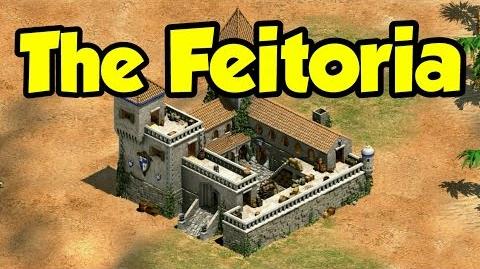 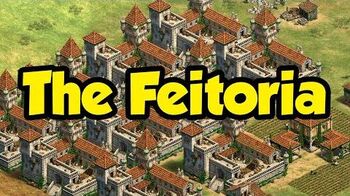