Provides an unlimited source of food

200
In Age of Mythology, Farms are buildings that enable Workers to gather unlimited food. The cost of a Farm varies with different civilizations. The high cost for the Atlanteans is presumably due to their Citizen's greatly enhanced work rate.

The Greeks, Norse, Atlanteans, and Chinese can build Farms in the Classical Age, but the Egyptians can do so in the Archaic Age. Like in other Age series games, only one Villager may work a Farm at a time. Farms do not hinder unit movement (unlike all other buildings), are very weak and can be destroyed very quickly. Moreover, another player's workers can take over an unoccupied Farm simply by beginning to gather from it.

On most maps, farming is not economically viable in the early game. Farms cost resources to build, while the other available food sources (animals and Berry Bushes) are free and yield food more quickly. Once these sources become more scarce and Farms have been upgraded, farming becomes more useful; by the late game, farming dominates food production. Farms should always be built in a secure area. Normally, this will be inside a player's base, preferably around to a Town Center, which acts as a drop-off point and can garrison and defend the farmers if necessary.

When capturing a player's base, rather than spending time razing farms, it may be a good idea to send workers to capture them once the area is safe enough.

The ability to farm was one of the great advancements in human progress, because agriculture made possible large, renewable food supplies that could be stored and consumed year-round. The availability of food plants, rich soils, a mild climate, and dependable water determined where farming was possible and where early civilizations arose. Improvements such as the plow, irrigation, and fertilization increased yields.

Egyptian Laborers gathering food from Farms around a Granary. 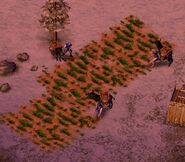 Atlantean Citizens gathering food from Farms.
Add a photo to this gallery
Retrieved from "https://ageofempires.fandom.com/wiki/Farm_(Age_of_Mythology)?oldid=304096"
Community content is available under CC-BY-SA unless otherwise noted.