The Farm is an economic building in Age of Empires II. It provides 175 food. With all farming upgrades researched, a Farm provides 550 food in the Imperial Age.

Farms may only be gathered from by one Villager at a time. Farms are very weak and do not hinder movements of friendly or enemy troops. If a Farm is not currently being tended, another player's Villager can capture it by simply starting to gather from it themselves. Farms can be automatically reseeded if they are queued in the Mill.

Farms should always be placed right next to Town Centers or Mills in order to keep the walking distances of the Villagers as short as possible. Prior to update 50292, Villagers mostly walked around on the left side of a Farm. Therefore, placing Farms to the right side of the Town Center or Mill first used to be slightly more efficient, as it reduced walking time.

Farms that are built before upgrades (e.g. Horse Collar) are researched do not gain the food bonus. If the research is completed while a Farm is being built, the food bonus applies to that Farm.

Farms have an inherent work rate of 0.4 food per second. This means they will produce 0.4 food per second upon being seeded and will add it up in their "storage", from which Villagers can gather food. This becomes essential if the farm is worked non-stop after being seeded, as typically Villagers' work rate exceeds Farms' work rate after Hand Cart is researched (Aztecs and to a lesser degree Khmer hit this farm-rate cap upon researching Wheelbarrow). This ultimately results into similar food production (0.4 food per second per farmer) for all civilizations (except for Slavs) in a Post-Imperial scenario, even though, for example, Mayans have their farmers' work rate reduced to 81% of a generic civilization. Slavs' farms have their work rate multiplied by ×1.1 in addition to their Villagers' work rate multiplied by ×1.18 which allows them to have ~10% higher farming rates in most circumstances.

Comparison to the Fish Trap[]

Farmers gather relatively faster from Farms than Fishing Ships gather from Fish Traps, however up until the late Imperial Age they are less effective cost-wise (also considering that Fishing Ships themselves cost wood). The actual gathering speed between them may vary due to traffic between gatherers and actual Farm/Fish Trap placement.

In comparison, Fish Traps have a construction/'re-seed' time of 40 seconds. It is decreased to 32 seconds with Gillnets and is also affected by the Japanese civilization bonus (both stack multiplicatively together, up to ~26.7 sec construction time for Japanese in the Imperial Age). 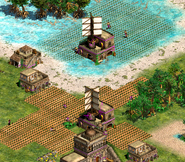 When built on mangrove shallows, Farms automatically become Rice Farms, which are identical to normal Farms.

Farms arranged for Mills in the closest possible proximity