Age of Empires Series Wiki
Register
Don't have an account?
Sign In
Advertisement
in: Scouts, Exploration Age, Age of Empires III,
and 3 more

The Explorer will collapse instead of dying when his hit points reaches 0 and can be revived by having a friendly unit or building around him once he regenerates at least 100 hit points, or paying a ransom of 100 coin at the Town Center, in which case the Explorer will appear there with full hit points

The Explorer is a hero in Age of Empires III. It explores uncharted areas of the map and has some special abilities to help itself and its colony. In standard random map games, all European civilizations start with an Explorer.

The Explorer can build Town Centers and Trading Posts. This allows the player a second attempt at rebuilding if their original colony was destroyed, provided that they have enough resources to build one and train Settlers (except for the Ottomans, who get them for free). He builds a Trading Post faster than regular Settlers, nearing that of a Coureur des Bois or a Settler Wagon.

The Explorer can explore and fight longer if he has a few units accompanying him. He can regenerate hit points, which increases as the player Ages up. Explorers are very ineffective at raiding enemy settlements early in the game, as they only deal 25% damage against villager-type units. They are also very weak against Spies and Ninja.

Unlike other units who simply die when their hit points reach 0, the Explorer will collapse. While the Explorer is in this state, the player can either pay 100 coin as ransom to whoever dealt the final blow (including Mother Nature) or help him back up on his feet with an allied unit or building (this also includes projectiles fired from friendly units); in order to rescue the Explorer, he must have at least 100 hit points.

Several "El Pollo Guapo" treasures, found on specific North American random maps, can provide additional stats such as a 20% speed boost or 20-100% hit point boost, which stacks with other treasures and technologies.

Every European civilization has a unique Home City Card for their Explorer, which improves his fighting ability and sends him a companion Explorer Dog. The Spanish Explorer, already having War Dogs of his own, does not get an Explorer Dog; instead it boosts the hit points and attack of his War Dogs.

The Explorer is automatically upgraded on each Age starting from the Commerce Age.

The attack increase also applies to the Explorer's special abilities.

Concept art for the Spanish Explorer 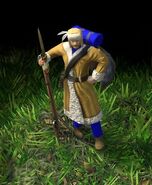 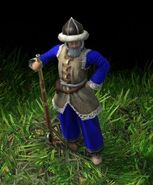 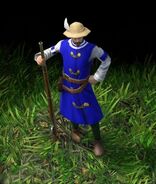 Explorers in the Definitive Edition