100
The Excavation is a structure that appears exclusively in the Egyptian part of the Fall of the Trident campaign in Age of Mythology.

The Guardian's Sword is buried beneath these sands.

The Excavation is featured in the scenario The Lost Relic, and is the primary focus of this scenario. Inside its rocks lies the sword of the Guardian.

The main objective in The Lost Relic is to hold against a three-pronged attack, long enough to unearth the Guardian's sword from the Excavation; in order for the player to win, they must order Laborers (they are provided with 12 of them) to "build" the Excavation up to 2500 HP (similarly to a Titan Gate).

Kemsyt will constantly send forces from beyond three canyons, to penetrate the defenses and kill the Laborers. If all Laborers are lost, the scenario is unwinnable. It should be noted that the Excavation itself is invulnerable to damage, including that inflicted from god powers.

The sword of the Sleeping Guardian lies beneath these rocky sands. The Guardian will sleep until a great evil threatens the land, when heroes will find and restore the sword to him. 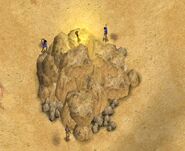 The Excavation, as featured in The Lost Relic

The Relic almost completely uncovered
Add a photo to this gallery
Retrieved from "https://ageofempires.fandom.com/wiki/Excavation?oldid=277505"
Community content is available under CC-BY-SA unless otherwise noted.