Age of Empires Series Wiki
Register
Don't have an account?
Sign In
Advertisement
in: Age of Mythology, Maps

Erebus is a random map in Age of Mythology. It represents the realm of Hades in the Underworld.

Notable facts about this map include the appearance of wild Shades and Serpents that lurk in some regions, especially close to ruins, where Relics and Boars may be found. There are also rivers of molten lava and some hills, that may constrict expansional actions.

Both turtling and rushing strategies will do, but expansion must be careful, as the resources may occasionally prove to be limited, and the hostile creatures may attack any player on sight.

Huntables include solely Boars. There are moderate amounts of dead trees around the map, and some Gold Mines.

The landscape is infernal, with lifeless, barren earth, rivers of molten lava and hostile creatures. Also, Harpies fly above the barren landscape; despite their hideous appearance however, they are totally harmless. The lighting of Erebus is unique and can be accessed on the Scenario Editor.

There is a very rare chance for a water version map to appear randomly; this one features water similar to the one in River Styx, dark and lifeless. This replaces the lava terrain normally found, but other than that, the gameplay, layout and local inhabitants are pretty much the same, especially as no fish are featured.

Shades and Boars, close to a Relic

The barren, infernal lands of Erebus 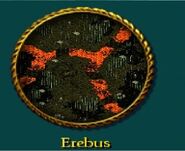 Erebus landscape on the Extended Edition 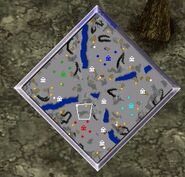