Age of Empires Series Wiki
Register
Don't have an account?
Sign In
Advertisement
in: Unique units, Age of Empires III, Dutch,
and 2 more

The Envoy is a scout unit in Age of Empires III that is unique to the Dutch and can be trained at the Town Center. In standard random map games, Dutch players start with an Envoy alongside their Explorer.

Intended for early-game scouting, the Envoy is much like the Native Scout, having higher line of sight, but slower movement and lacking stealth ability. Envoys are primarily used for scouting and exploration, since they are not strong military units and have a wide line of sight. They are useful in the start of the game, since they can be used in the first age, to explore the map and scout out enemy towns. They are not very useful later in the game, with the exception of checking up on the enemy and uncovering stealth units. Their cheap cost provides an effective early warning against impending attacks, although they will usually die in the process. 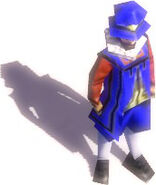 The Envoy in-game
Community content is available under CC-BY-SA unless otherwise noted.
Advertisement